Kezia loves spending time in Portobello, and shares the belief with ‘Big Things on the Beach’ that Portobello Beach and Promenade should be the pride of Edinburgh.  Kezia supports local efforts to regenerate and reinvigorate this already special part of town, and works closely with her Labour colleagues such as Cllr Maureen Childs to help turn this aspiration into a reality.

If you also want to support this cause you can find more detail on exactly what the plans are for Portobello and how to get involved with the campaign, check out their website at www.bigthingsonthebeach.org.uk.

Kezia also recently tabled a number of Parliamentary Questions about how the Scottish Government could better support seaside destinations. Here’s the detail: 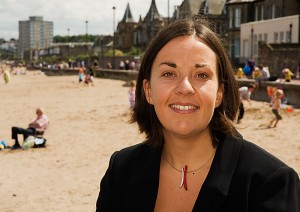 As I indicated in my earlier answer to S4W-05902 on 12 March 2012, the Scottish Government does not provide specific funding to support seaside destinations for tourism purposes.

The Coastal Communities Fund aims to support projects in Scotland’s coastal communities that promote sustainable economic growth and jobs in tourism. In addition to this, VisitScotland supports local initiatives through its Growth fund and provides business support for individual tourism businesses and tourism groups.

The economic development agencies of Scottish Enterprise, Highlands and Island Enterprise and VisitScotland continue to contribute to economic intelligence and growth opportunities and actively engage, via local authority partners to ensure that opportunities are identified and supported wherever possible. In addition VisitScotland, Scottish Enterprise and Highlands and Island Enterprise collaborate to provide a range of tourism specific resources which may be accessed using the url http://www.tourism-intelligence.co.uk/.

All answers to written Parliamentary Questions are available on the Parliament’s website, the search facility for which can be found at http://www.scottish.parliament.uk/parliamentarybusiness/28877.aspx.

Kezia Dugdale (Lothian) (Scottish Labour): To ask the Scottish Government  how it can support the (a) development and (b) people’s enjoyment of Edinburgh’s seaside as a destination. (S4W-10038)

Kezia Dugdale (Lothian) (Scottish Labour): To ask the Scottish Government  how it plans to promote intra-Scottish tourism and how important this is to the economy.

Tourism is a key sector of the Scottish economy and tourism related industries are estimated to have contributed around £2.9 billion to Scottish GVA in 2010.

VisitScotland continue to build upon their domestic marketing campaigns to maintain and increase these markets. In particular 2013 has been designated as our Year of Natural Scotland, a year in which we will celebrate Scotland’s reputation as a place of outstanding natural beauty. In the run up to, and during, the year we will focus on promoting the activities available in Scotland’s natural tourism attractions and will inspire the people of Scotland to rediscover their own country and visitors to come and experience and participate in Scotland’s natural festivals and events, natural tourism attraction and outdoors locations.

Question S4W-05902: Kezia Dugdale, Lothian, Scottish Labour, Date Lodged: 23/02/2012
To ask the Scottish Executive what support it offers to areas such as Portobello to (a) maintain and (b) promote their status as seaside destinations.
Answered by Fergus Ewing (12/03/2012): The overarching objective of the Scottish Government is to promote economic growth across the whole of Scotland and for the benefit of all. Over £216 million has been directly invested in Regeneration activity since 2007 to regenerate communities across Scotland.There is no specific funding available for the regeneration of seaside towns as tourism destinations, although we recognise they are an important asset for Scottish tourism. However, the Coastal Communities Fund aims to support projects in Scotland’s coastal communities that promote sustainable economic growth and jobs in tourism.In addition to this, VisitScotland supports local initiatives through its Growth fund and provides business support for individual tourism businesses and tourism groups.Scottish Enterprise also provides support specifically to Edinburgh through the Edinburgh Tourism Action Group (ETAG). ETAG aims to improve business performance, enhance the visitor experience and strengthen Edinburgh’s position as a world class visitor destination. Portobello is seen as part of the overall Edinburgh tourism product and not as a tourism destination in its own right. Tourism businesses in Portobello are able to benefit from the range of support ETAG offers.
Current Status: Answered by Fergus Ewing on 12/03/2012