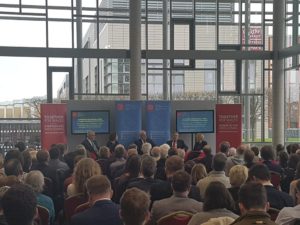 The threat to the future of the UK is very real. Our country is more fragile today than it has ever been, even in the days before the last independence referendum.

And that’s not just because of the threat of another referendum in Scotland, but because of the pressures which Brexit has already unleashed across the UK, and which are only going to get worse.

The solution is definitely not independence, as Nicola Sturgeon suggests. It’s not this union of nations which is unfair or unjust, but the decisions of powerful within it.

We are spending so much time thinking about the deal we do with the other 27 nations of Europe, and not enough time considering the deal we need to do with ourselves: this UK family of nations.

It has only ever been Labour that has been prepared to take the radical steps needed to change how our country works.

The blunt truth is that the constitutional debate will determine how working people will do over the coming years, and whether or not our economy is going to succeed.

That is why it now has to be central to our thinking on the economy. And why moving political power out of Whitehall isn’t just a constitutional convenience, but an economic necessity.

Please note that Kezia can only deal with correspondence from constituents within the Lothian regions due to Parliamentary rules and procedures. When getting in contact please include your postcode and details of your case.