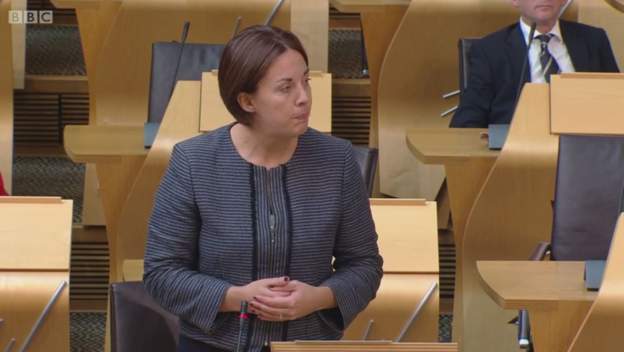 Presiding Officer, the most important responsibility this Parliament has is to set a budget.

This determines how much money is available to spend on the NHS, the most precious institution in this country.

The budget allocates funding for nurseries, schools, colleges and universities – the institutions that will give our young people the skills they need to compete for the jobs of the future and grow our economy.

And it decides how much money our councils receive, which has major consequences for the funding of vital local services like social care.

In an age of austerity a government’s budget requires even more scrutiny than ever before, not less.

Yet less scrutiny is exactly what the SNP are attempting to deliver.

Derek Mackay’s decision not to publish the draft budget until December will severely limit the ability of the parliaments committees to scrutinise the budget properly.

In addition, by refusing to provide as much information as possible in advance of the publication of the draft budget later this year Derek Mackay is treating this Parliament with contempt.

Particularly since he is going back on a promise he previously made to this Parliament.

The late publication of the Chancellor’s Autumn Statement has consequences for the Scottish budget but isn’t sufficient justification for Derek Mackay’s refusal to publish indicative figures and budget scenario planning information.

As the Finance Committee confirmed, the consequentials from last year’s Autumn Statement impacted just 0.5% of the Scottish block grant.

Given the cuts we face, that’s not an insignificant amount of money. But it cannot be used as an excuse for avoiding scrutiny of the government’s spending decisions.

We are only having this debate today because the convener of the Finance Committee, a member of the governing party, rightly would not accept the Finance Minister’s attempt to avoid Parliamentary scrutiny as much as possible.

To quote Bruce Crawford it is “unacceptable” that the Finance Minister is “not prepared to publish any such scenario planning information in advance of the draft budget.”

I am pleased to support Patrick Harvie’s motion, which urges the government to come forward with its budget scenario plans before the October recess.

This motion has, at last count, received the support of the majority of MSPs across this chamber.

Whatever else happened in May’s election, the SNP lost their majority.

This Parliament must hold the government to account for the budget it seeks to pass. The Labour Party will certainly do that.

So here are three very clear questions for the Finance Secretary:

1.       Will he commit to producing a three year spending review so that public services and all organisations dependent on government funding can plan ahead?

2.       Will he guarantee that next year’s Draft Budget Bill will revert back to being published in September as in previous years?

3.       And will he support Labour’s call for the Scottish Fiscal Commission to independently scrutinise all Scottish Government accounts, including all spending commitments?

Presiding Officer, the Labour Party will not vote for any budget that meekly passes on cuts – or even doubles down on them.

The First Minister promised voters she would be an anti-austerity champion. Instead, she has become an administrator for austerity.

So when the Scottish Government presents the budget to Parliament, we will place amendments to introduce a 50p tax on those earning over £150,000 to invest in schools and nurseries.

And we will seek to add a penny to income tax to pay for public services.

Making decisions for Scotland that the Tories would never make, and using the powers which we have argued for.

This, together with our other tax proposals, will enable us to stop further cuts to the public services we all rely on.

With the full range of powers the Scottish Parliament now has, the SNP Government faces a clear choice.

Accept a Tory Budget from Westminster, or go our own way with proposals to grow the Scottish economy and protect our schools and hospitals.

More and more cuts to Scotland’s budget harms our country’s growth, risks jobs and the prospects for our young people.

We need to invest to provide the next generation of Scots with the chances they need to succeed.

If the SNP minority Government does not accept these proposals, and forces another austerity budget on Holyrood, we will vote against it.

If they want support, they’ll need to look to the Tories for that. Labour will not help the SNP pass an austerity budget on our watch.