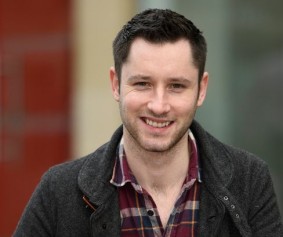 In her Daily Record column, Kezia voices congratulations for her friend Gordon Aikman whose fightback campaign against motor neurone disease has earned him a British Empire Medal.

HOLD the front page, I’ve found a politician who’s a hypocrite – me.

Normally, when the Queen’s birthday honours list comes out, I protest about all the pomp and ceremony, make some catty comment about the lack of women on there and ponder at all the unsung heroes in our communities who will never have letters after their name.

This year, it’s different. My good friend Gordon Aikman , whose fightback campaign against motor neurone disease receives the proceeds of this column, has been awarded a British Empire Medal.

It’s a civic award for bravery – and what a courageous guy he is.

MND is a horrific disease that robs you of your mobility . For Gordon, it started at his fingertips and it’s creeping up his hands and legs. Eventually, he’ll lose the use of his limbs and the disease will creep towards his core.

Like almost everyone with MND, he’ll probably lose his voice.

Picture Stephen Hawking and you a see a guy with MND who is unable to move . He speaks entirely through a computer.

The technology is incredible, but Stephen Hawking’s robotic voice is recognised around the world for being exactly that – robotic.

MND research is chronically underfunded so we don’t know enough yet to find a cure – to give people back the use of their arms and legs. But we can give them their voice.

Groundbreaking work at the Euan McDonald Centre in Edinburgh is on the verge of developing software which will give people their natural voice back.

Just from reading a newspaper aloud for an hour, they can synthesise all the natural sounds and accents so one day it can be given back in something as simple as an app on an iPad.

So much of who you are isn’t just what you say, it’s how you say it. This technology could be utterly liberating for people who lose their voice through illness.

But it will only have mass reach if people can access the communication equipment they need. At the moment, getting your hands on that equipment is another in a long list of struggles for people with the disease.

That’s why this week, MND campaigners including Gordon are demanding that the law is changed so no one dies without a voice.