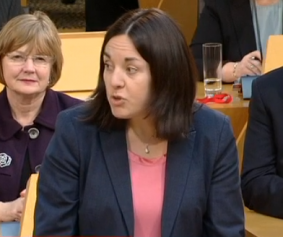 In today’s Daily Record (Monday 11th May 2015), Kezia looks back on the General Election result and both relates and reflects on the new SNP MPs heading to Westminster.

Congratulations first and foremost to Scotland’s 50 new SNP MPs. Among them, some will have known in their bones they were destined for Westminster. For others, their election must have come as a shock, however welcome. I wish them all well.

I remember that feeling of being elected by surprise.

Imagine feeling exhilarated and exhausted all at once. Excited but also absolutely bricking it. Am I good enough? Will I be found out? Where do I go? What about staff, offices – priorities?

That picture of the full SNP team under the Forth Crossing was epic. A healthy mix of young and old. From shop workers to advocates, newsreaders to business owners, they look like Scotland and now it’s their duty to speak for it. All of it.

The electoral map of Scotland, beaming yellow, depicts a country united around one voice at a time when we’ve never been so divided – and therein lies an early danger for the SNP.

We’ll see a referendum on Europe, an attempt to dismantle the Human Rights Act and the fundamental protections that gives each and every one of us.

If that wasn’t enough to deal with, there’s £12billion of welfare cuts to come that will be felt deepest by those least able to speak out against it.

It’s hard to see a sunny side.

The problems my party face are deep, long-standing and wide-ranging. There’s no quick fix and no 400-word column could begin to do it justice. But they are nothing compared to what working people across the UK now face. Time for some serious reflection and hard truths – but not introspection.

More than ever, we need our Scottish Parliament to be bold.

To use the powers it has and the powers that are coming to be the progressive force it needs to be. Not just with a strong voice, but in deeds and action.