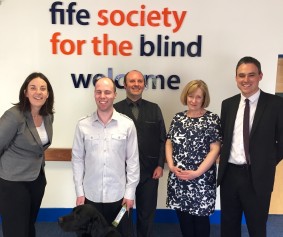 In her Daily Record column this week, Kez talks about what full fiscal autonomy actually means, disability, public opinion on a second referendum, and more.

Full fiscal autonomy. Sounds like something only a banker, or a university professor – would understand – indeed, care about.

Most folk are too busy trying to make their salary last until next pay day, or find the cash to meet their electricity bill, to pay much attention to obscure economic terms, especially when they are bandied about by politicians.

But just as “collateralised debt obligations” were meaningless to everyone but a handful of Wall Street number crunchers  - until they helped cause 2008 crash - so the SNP’s reckless plans for full fiscal autonomy have the potential to damage people’s lives and ruin Scotland’s economy.

It seems a simple idea. Scotland stays part of the UK but instead of getting cash for our NHS and other public services from our share of UK taxes, the SNP want Scotland to raise its own taxes.

So far so good. Problem is that Scotland currently gets £1,200 a year more per person from UK taxes than the rest of the UK.

That extra money helps pay for things like free personal care, free university tuition and our NHS, not to mention schools, roads and our police.

If Scotland were to depend on its own taxes there would be an additional £7.6 billion gap between what we raise, and what we spend.

Countries are no different to families. If we spend far more than we earn we soon get into trouble, and we either have to borrow to make up the difference, or spend less.

Under the SNP’s plans spending less would mean having to cut vital public services – fewer nurses on our busy hospital wards, fewer police on the streets, and less money for schools and childcare.

Full fiscal autonomy also means that Scotland would not be part of the UK welfare system. At the moment workers from across the UK pay national insurance and income tax to fund pensions and child benefit for everyone, whether they live in Paisley or Preston.

Scotland gets a bit extra for pensions just now, because we have more old folk, and the number is set to grow over the next twenty years.

Is that really the kind of country any of us want?

Fife Society for the Blind

Most of us go online every day, but for blind and partially sighted people surfing the Internet is not as simple as switching on your phone or tablet.

I visited Fife Society for the Blind last week and met gamer Stuart Beveridge who has developed Monkey Gaming, a weekly podcast for gamers who are blind or partially sighted.

As Stuart told me, many blind and partially sighted people love gaming and he hopes his reviews will help them enjoy it even more.

Stuart’s idea may be simple, but it has a really positive impact.

And that should be the aim of every government – to provide simple solutions so that people can carry out everyday tasks while retaining their independence and dignity, whether it is playing games, hailing a taxi or going to work.

But the last five years of Tory cuts have hit vulnerable people hard, and they will go further if elected for another five years.

The Tories have made no secret of their plans to cut £12 billion from welfare after the election.

That’s over one billion pounds from Scottish people – more than all the disability benefits paid in Scotland.

We will change the failing Work Capability Assessment.  We will tackle the huge Personal Independence Payment backlog that forces people into poverty and we will use new devolved powers to help disabled people into jobs.

We will scrap the hated bedroom tax and we will include disabled people in the decisions that affect their lives – because we want to work in partnership with disabled people, not dictate what’s best for them.

So Hillary Clinton has finally confirmed that she is going to stand for US President.

It is incredible that since 1789, when George Washington took office, there has never been a woman in the White House.

The UK is not much better. Maggie Thatcher is still Britain’s only woman Prime Minister, and there has never been a woman Chancellor.

Scotland has a slightly better record. One of the things I do enjoy about First Minister’s Question Time is that three of the four politicians who take part are women.

But there is still more, much more to do.

Scottish Labour has led the way on gender equality – we were the first party to have positive action to get more women into power.

And I back 50 50 quotas so that our parliament is made up of half men and half women – just like real life.

Other parties, including the SNP, have only recently realised that things have to change.

But we need more than warm words from a woman First Minister to bring about change. We need real action now.

A poll at the weekend showed that more than half of Scots don’t want another referendum before at least 2020.

This echoes what people say to me on the doorstep.

This leaves Nicola Sturgeon in a quandry. Her party members want a second referendum as soon as possible, and will be pushing for it to be in the SNP’s 2016 manifesto.

But many more Scots think last year’s vote should be a once-in-a-lifetime poll.

This explains why she is so reluctant to say anything about her plan’s second referendum. But she cannot stay silent forever.