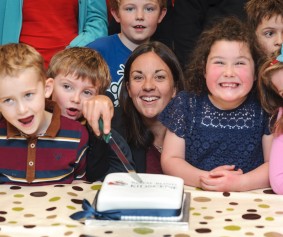 Kezia follows up from her questioning of the First Minister on childcare at FMQ’s last week by writing about the Governments track record on childcare in her Daily Record column.

Tell that to the thousands of parents who can’t access the affordable childcare they need to make ends meet.

The SNP first promised all parents of three and four-year-old kids 600 hours of free early learning and childcare in 2007.

Many of those kids had started high school by the time the SNP got remotely close to keeping their promise.

Yet if you listen to Sturgeon, she’ll tell you that 98.5 per cent of three and four-year-olds have registered for it and that’s why it’s such a great success.

When you break down the numbers, 117 per cent of three-year-olds in Scotland and 89 per cent of four-year-olds are registered for the childcare – averaging out at 98.5 per cent.

Sounds like fuzzy maths to me. How do you sign up 117 per cent of Scotland’s cheeky little monsters?

They’re either three or they’re not. Maybe you’re counting some kids more than once. Or both.

That’s exactly what’s happening. Parents desperate for a place are registering their kids at more than one nursery.

In other places, nurseries are accepting the names of two-year-olds ahead of their birthdays and in most places parents can’t even take up the place they are offered because it’s so inflexible.

Imagine being told you can have your free childcare but only on a Monday and Thursday afternoon. What use is that to you if you work Wednesdays and Fridays?

What if you do shifts and your patterns change every week? What if the nursery is miles from your house and only opens its doors at the same moment you’re supposed to start work?

What if you have older kids who need to be dropped at primary school at the same time? What do you do in the summer holidays, at Easter, on those dreaded in-service days?

What if your life just doesn’t fit into a perfect Government spreadsheet?

I’ve lost count of the number of mums and dads I’ve met who are at their wits’ ends when it comes to childcare. If Sturgeon thinks her Government’s record on childcare is a “massive success story”, I’d hate to see her definition of a shambles.

If the First Minister really believed her Government’s record stood up to scrutiny, she should heed the calls of the campaign group Fair Funding for our Kids, who are demanding a proper audit of provision.

Get the abacus out and count the kids in. When two plus two equals four, I’ll give her 100 per cent support.