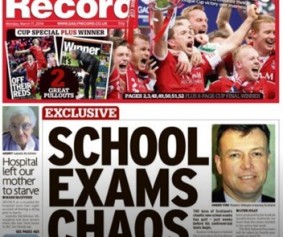 Labour has been raising concerns about the implementation of Curriculum for Excellence for over 2 years now. Just two weeks ago we used our Labour Business slot to highlight the concerns of parents, pupils and teachers across the country.

Over the weekend we learned that a senior member of SQA, a man responsible for much of the CfE’s implementation, had resigned his post just weeks before pupils would sit these exams for the first time.

The news coverage led to another flurry of emails from concerned parents across the country. I used two real life stories and quotes to detail parents concerns and put them directly to the Cabinet Secretary. Read on and decide for yourself whether what i said and the manner in which i put forward the argument could be described as “reprehensible” - the Cabinet Secretary’s closing description.
1. Kezia Dugdale (Lothian) (Lab): To ask the Scottish Government what its position is on the resignation of the head of the curriculum for excellence ahead of the first sitting of the new national exams. (S4T-00635)

The Cabinet Secretary for Education and Lifelong Learning (Michael Russell): The Scottish Qualifications Authority has made it clear that the new qualifications will be unaffected. The individual, Mr Roderic Gillespie, is part of just one of eight different teams within the SQA that have been involved in the curriculum for excellence and the SQA is, of course, one of the 17 different organisations—ranging from local authorities to teaching unions, Education Scotland and the Scottish Government—that are involved in the delivery of CFE.
I should also make it clear that, although Mr Gillespie was involved in the development of the exams, he has not been involved in their implementation. Given that we are now only 42 days from the first exam, it is fair to say that we are long past the point at which development was complete. That said, Mr Gillespie remains in post until after the first national exam has been taken, by which time all development work relating to the new highers will also be complete. Therefore, it is little surprise that the SQA, along with the other partners that are involved in delivering CFE, is able to say with confidence that the new qualifications will be unaffected by the change in personnel.

The introduction of the new qualifications remains on track. The Scottish Government and its partners have provided an unprecedented level of support to help teachers and schools to prepare for curriculum for excellence and the national qualifications, which were developed with considerable input from stakeholders and with broad support. The most recent support package was announced on 21 February and was widely welcomed.

Kezia Dugdale: I thank the cabinet secretary for that answer, but I assure him that parents remain concerned. Yesterday, I received an email from a concerned parent who, following the resignation, said:

“Is there something so wrong that he wants to leave before he has to deal with sorting out the mess that he has created?”

They went on to say:

“News of Mr Gillespie’s resignation does not give me confidence and has made me even more worried about the way the new exams have been introduced … There seems to be constant testing with no time for consolidation in class. My son has continually complained about the courses being rushed and about mistakes in the course materials that are being used to help revise. He was told in one class they did not have time to review the prelim paper. We have had to purchase extra resources at considerable expense to help him study for his exams. Not all parents are lucky enough to be in a position to afford this for their children.”

What does the cabinet secretary have to say to that parent? Is he proud of his Government’s record on the delivery of curriculum for excellence and the new exams? Will he take full responsibility for them?

Michael Russell: It is important that, when people who are involved in education—this applies to people at every level—have concerns, they raise those concerns in the way that is most supportive of young people, particularly young learners. With 42 days to go to the exams, I stand with Jackie Brock, the chief executive officer of Children in Scotland, who, on this issue, today said:

“Young people themselves will not be worrying about the departure of one individual from the SQA. Their main priority right now is to study and revise for their exams. They deserve the best in consistent support from all of us.”

I have some advice for the member who asked the question: it is probably best to contact the SQA to ask a question before contacting the newspapers. That will provide the best support that can be given to our young people.

I would be happy to outline for the member, either here or in writing, the very substantial support that has been in place for many years for the new national qualifications. Such support for CFE remains in place, and it has been warmly welcomed by the teaching unions, among others, every time we have put it in place.

We now need to move towards the first diet of exams—which I stress is only 42 days away—in a way that supports our learners and does not simply seek publicity for politicians.

Kezia Dugdale: The cabinet secretary says that the support package has been warmly welcomed by the Educational Institute of Scotland. That is the EIS that said that it has not encountered such widespread anger, disappointment and frustration with the exams authority as it is currently witnessing. I do not blame the SQA; I blame the cabinet secretary. It will be his responsibility when this goes wrong.
I point the cabinet secretary to what is happening at Prestwick academy, which he seems to be unaware of. The parents and the headteacher there have made the situation known to the authorities but have received no response. There is a serious shortage of chemistry teachers at Prestwick academy, such that it will not be possible to teach the CFE course in its entirety before the day of the exam. Therefore, the headteacher is having to get in teachers from other local authority areas to teach the children on a Saturday to ensure that they can complete the coursework before the day of the exam.

Is the cabinet secretary aware that, according to SQA guidelines, that will not be counted as exceptional circumstances when the tests are reviewed and marked? Does he think that that is acceptable? Will he take steps to ensure that, when his Government has failed to implement the national curriculum properly, pupils will not pay the heaviest price?

Michael Russell: Of course, there is no national curriculum in Scotland. That is a fairly basic piece of information that requires to be known. Curriculum for excellence is a methodology—it is a means of teaching.
We work very closely with the SQA and Education Scotland in taking an overview of all developments in Scotland. The member is conflating a variety of different issues. I hope that she is doing so out of a genuine lack of knowledge of education in Scotland. If she is doing so to create an atmosphere in which the young people who are studying for these exams, which are 42 days away, will be put in a position of fear and concern, that would be—I choose the word carefully—reprehensible. [Interruption.]