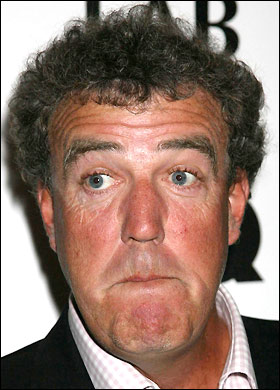 So Clarkson apologies for the slur on Brown’s visual impairment but his use of the word “Scottish” as a term of insult remains ok? Scottish politicians from all parties unite tonight in opposition to Clarkson’s jibe.

It’s not even his first offence as this Times article demonstrates:

“…In fact I can’t even say we’re British any more because then all of Scotland would rush over the border, pour porridge down my trousers and push a thistle up my bottom”

Porridge and Thistles eh? Normally I’d say that was an outdated stereotype but sadly, Alex Salmond’s Scotland is full of shortbread tins, tartan and renditions of Caledonia.

I have to question how the SNP can be critical of Clarkson’s views on Scotland when his cliched stereotype is a rizla paper away from their vision for my country.

I feel more British now under the SNP than I’ve every done before and that’s the direct consequence of my distaste for the “wha’s like us” mentality of the SNP in action.

Anyway, what do I think of Clarkson’s remarks apart from concluding - what I knew already - that he’s an arse?

…Well he’s entitled to an opinion, Carol Thatcher is free to exercise her colonial vocabulary and Jonathan Ross was duly punished for his sense of what constitutes “funny.”

What makes all their actions worthy of the controversy is that they made their remarks on work time, receiving huge salaries, that we pay for. These incidents would not have generated half the column inches had they not been ‘clocked in’ as BBC employees…

But maybe they’re all doing us, the British public, a favour? Perhaps this recent spate of incidences is indicative of a step change in the public’s attitude to what should be tolerated?

Maybe we now all accept as a first principle that discrimination on the grounds of disability, race or nationality is wholly unacceptable - but now feel a desperate need to establish the boundaries of what constitutes discrimination?

…And the BBC, in its desperate attempt to maintain it’s impartiality, is stumbling through this very debate with us all?

I’m not sure what I think,but that in itself is the BBC’s dilemma.